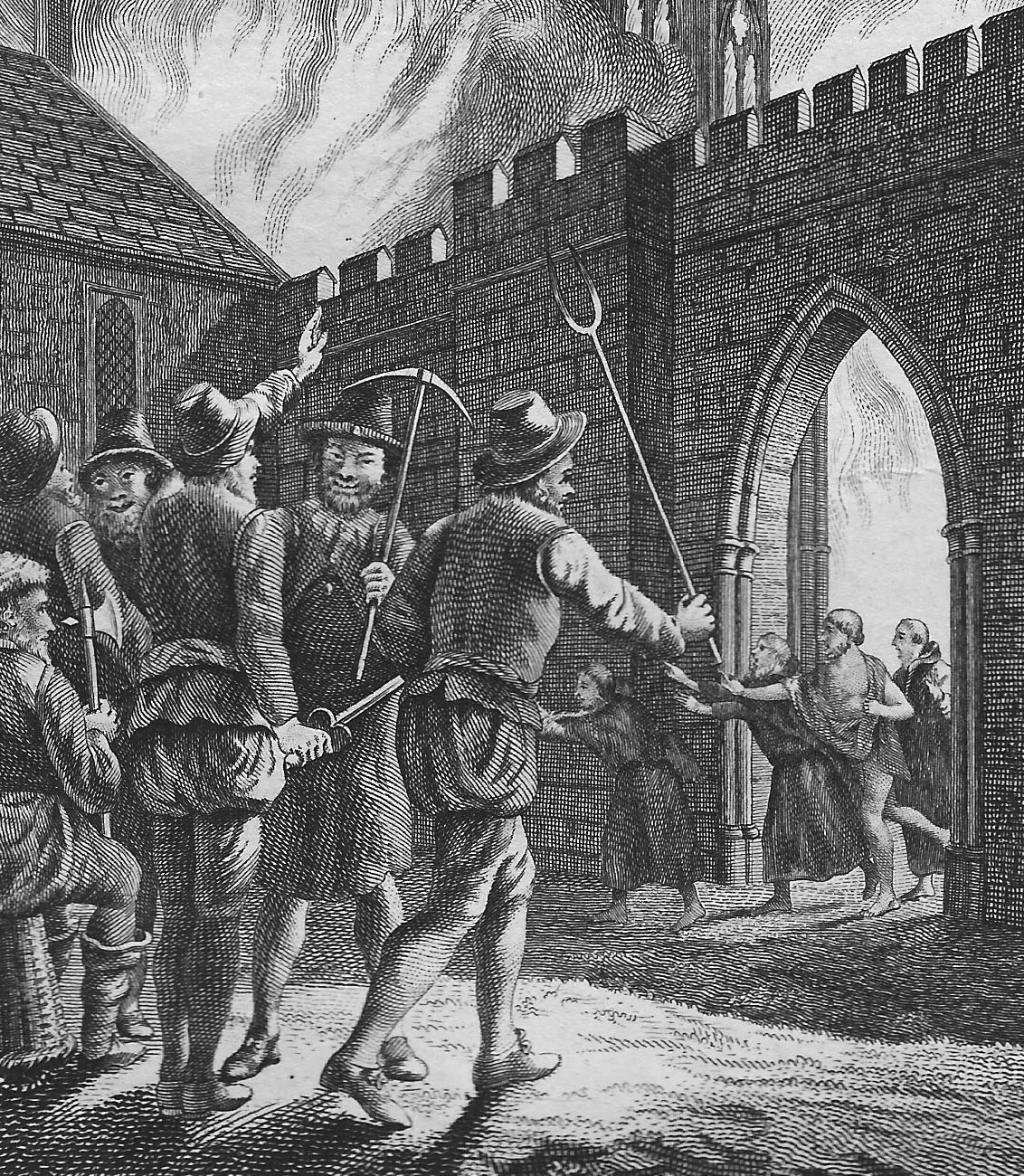 In the summer of 1381, the people of England had had enough: disease, war, and low harvests had caused great discontent throughout the land. The Statute of Labourers (1351)—which kept wages fixed at a low price—was still in force, while the lowest class in society, the serfs, were the virtual slaves of the lord, forced to work the land for little-to-nothing beyond what was needed for their subsistence.

The Church might have preached deference to one’s betters, and for the lower orders to accept their lot in life, but some preachers like John Ball had a different view. John Ball was a radical preacher who went from town to town preaching a doctrine of equality, epitomised by his famous lines:

When Adam delved and Eve span, who was then the gentleman?

Conditions were ripe for an uprising of the people against their tyrannical overlords. And the first outbreak was at a village called Fobbing in Essex in May 1381, when the people there refused to pay the poll tax, having insisted that they had already paid it. The tax collectors were outnumbered and chased out of the village.

In fairness to the tax collectors, the villagers probably had not paid the tax already, for we know that there was a lot of tax evasion in the fourteenth century.

In any case, news of the revolt spread like wildfire, and soon the men of Kent and Essex rose with one accord to demand the abolition of the poll tax, the end of serfdom, and the freedom for all men to buy and sell in the marketplace (which serfs could not do).

At the initial outbreak of the rebellion in May, Ball was locked away inside Maidstone Castle, his radical message having gotten him in trouble with the authorities. It was probably while there that he wrote the following letter—listed as ‘a pastoral exhortation and sermon’ by scholars and preserved on a manuscript in the British Library—intended to be delivered to the Essex men.[i]

The letter is produced here in modern English (transcription completed by myself):

The Letter Sent by John Ball to the Commons of Essex

John Sheppard, some time priest of Saint Mary’s in York, and now of Colchester, greets well John the Nameless, John the Miller, John the Carter and bids them to be wary of treachery in the borough, and stand together in God’s name, and bids Piers Ploughman to go to his work, and chastise well Hobb the Robber, and take with you John Trewman and all of his comrades, and obey only one leader.

John the Miller has been ground down to almost nothing. The king’s son of heaven shall pay for us all. But be wary or you will be sorry; know your friend from your foe; do not sin—show restraint and do not loot, for you can do better than that. Seek peace and adhere to that principle. Thus bids John Trewman and all his fellows.

Ball first introduces himself under the alias of John Sheppard. As he went from town to town, preaching a subversive message of equality in defiance of the authorities (for which he had been locked up more than once), the need for such aliases becomes apparent. Perhaps it was as John Sheppard that the men of Essex knew him.

He then mentions three people: John the Nameless, John the Carter, John the Miller. These did not refer to any particular person but to certain types: John the Nameless could refer to, perhaps, the lowest of the low, the serfs. Yet the 1381 rebellion was not simply a mob of discontented serfs, for respected village folks were aggrieved at having to pay another poll tax, and this is why the miller and the carter, two important village trades in the fourteenth century, are also mentioned. This is an inclusive social protest that has grown out of annoyance with the poll tax, cutting across all class distinctions. They need to show solidarity with each other in God’s name.

Curiously, Ball then proceeds to reference Piers the Ploughman of Langland’s famous 1377 poem. Piers Plowman was an allegorical poem in which a dreamer surveys medieval life, the follies of its higher and lower classes (the poem is also noteworthy for containing the first literary reference to Robin Hood). The figure of the ploughman was said to be representative of the most virtuous class of medieval society, while the other figure which Langland mentions in his poem, Hob the Robber, was the antithesis of the virtuous Christian worker. And it was very convenient that one of the architects of the poll tax was named Robert Hales and was easily elided with a ‘robber’. So Ball was using contemporary popular culture to make a political point and criticize the establishment.

Ball exhorts the commons of Essex to ‘take with you John Trewman and all of his comrades, and obey only one leader’. John was one of the most common names in medieval England, and John Trewman is another ‘everyman’ type of the lower orders who, in Ball’s words, should be ‘taken’, that is that they should be recruited to the cause. The rebels should organise—recruit everyone they possibly can for their cause but importantly they should be organised under one leader.

Then we come to the main part of the letter beginning with the words ‘John the Miller has been ground down to almost nothing’. In the original Middle English, the words are as follows:

The Kynges sone of hevene schal paye for al.

That is to say, taxes have so reduced the circumstances of the common people, typified by men such as John the Miller, that they have almost nothing left. The people are right to be angry.

Yet they must be wary: they will have many foes who will seek to undermine and demoralize them. They should therefore engage, as far as possible, in peaceful protest. They should not loot anyone’s properties. If the rebels follow Ball’s guidelines, then all should go well.

Ultimately, the Peasants’ Revolt of 1381 was a violent clash between the ruling class and the lower class. The rebels killed the Chancellor, Simon Sudbury, as well as Robert Hales, while the rebel leader Wat Tyler was killed at Smithfield, and Jack Straw and John Ball were later put through an excruciating death for their role as ringleaders of the revolt.