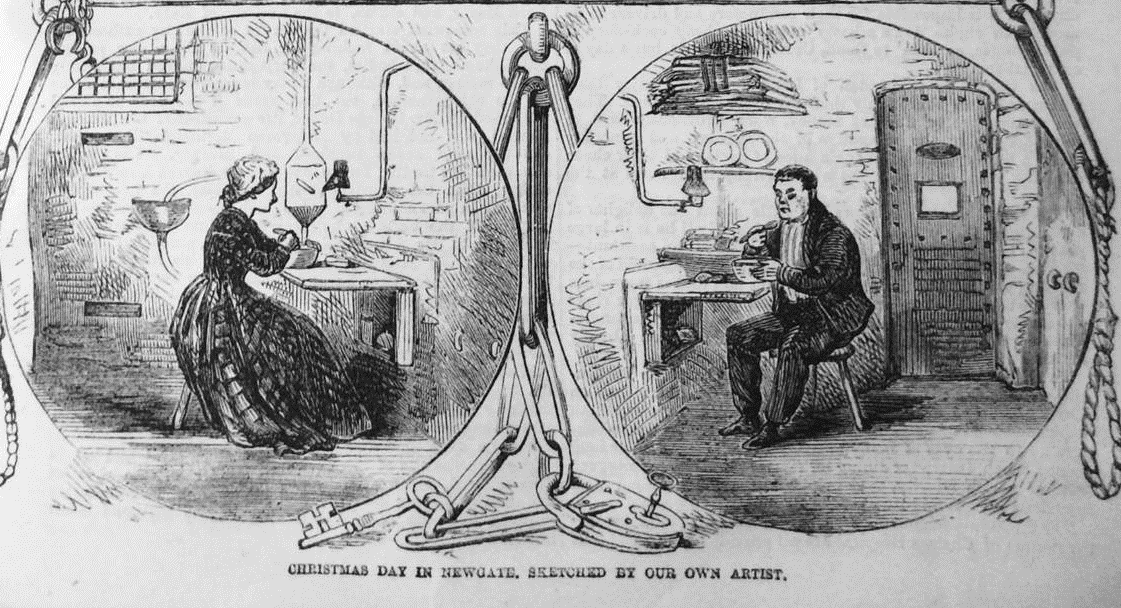 Newgate gaol was London’s most infamous gaol. It was built in the twelfth century as a place to hold prisoners until judges were available to debate their innocence. The original gaol was destroyed by the Great Fire of London in 1666. After this it was rebuilt and expanded into two new buildings, and remained in use until 1902.

Newgate has been home to some of the most famous criminals in English history, some of whom I’ve written about on this website before such as:

It was not just hardened criminals who found themselves unlucky enough to be imprisoned within its walls, however. The Jacobean playwright Ben Jonson, who authored The Sad Shepherd; or, A Tale of Robin Hood (1631) found himself spending a brief spell in Newgate after killing a man in a duel. The novelist Daniel Defoe, the author of Robinson Crusoe (1719) found himself in Newgate after having published a pamphlet attacking the government entitled The Shortest Way with Dissenters (1701). The Venetian libertine Giacomo Casanova (1725-1798) similarly found himself residing in Newgate, having been charged with bigamy, a charge which, in all likelihood, was probably justified.

In the literature of the seventeenth, eighteenth, and nineteenth centuries Newgate gaol looms large. Indeed, it gave its name to The Newgate Calendar, a compendium of criminals’ lives that appeared frequently throughout the eighteenth century. Newgate was an idea as much as a place. The people in it constituted, as Henry Fielding declared in his novel The History of the Life of Mr. Jonathan Wild the Great (1743):

Human Nature with its Mask off.

Yet in the eighteenth century one could find life in Newgate quite comfortable. If you were a person of means, then you could pay the gaoler for your own cell, and perhaps he would take your manacles off. If you were feeling “lonely”, then perhaps you might get your mistress to visit you during your confinement. If you were one of the poorer prisoners, however, you would be with the masses in the festering dungeons below, the stench of which apparently made passers-by hold their noses.

Whilst for the majority of its history the gaol was little more than a holding cell whilst people awaited their sentences of death, transportation, the pillory, or hard labour, by the nineteenth century things began to change. The government began to look at trying to reform prisoners. This meant that prisoners would be spending more time there; prison now would be about both punishment and rehabilitation.

The reporter who visited Newgate on Christmas Day was writing for The New Newgate Calendar, a penny dreadful (notable for featuring both current affairs and entertainment) which was published between 1863 and 1865 (thieves and rogues are the real heroes of penny dreadfuls, and bear no relation the mish-mash of late Victorian supernatural Gothic horror monsters in the recent eponymous TV series). Eighteenth-century criminal biographies were published as moralist texts, and from the following opening paragraph, it is evident that the reporter’s aims are the same as his eighteenth-century forbears:

Yes! Christmas in Newgate! – and why not? You are free from its sombre, grimy walls, but all are not so fortunate! You are certain of a slice of rich plum pudding, and a cut of turkey, or tit-bit of fat goose, but do you suppose that all of the thousands who look for a dinner in the big city of London on this twenty-fifth day of December, in the year one thousand eight hundred and sixty-three, will feed upon pudding, turkey, and goose? Not a bit of it, we tell you; so thank your lucky stars that you are well provided for. And while you revel in good cheer, make your friends welcome, romp with your children, or stir that glowing fire, do so in a spirit of thankfulness; forget not that thousands hunger without your door, and that many poor wretches – driven to crime by want and evil companionship – have sinned and sinned again, and broken our laws, until, in their evil fortune, they are compelled to eat their dinner in solitude on Christmas Day, and that within the brick walls of Newgate.

It is a pleasure to have scanned this issue from my personal collection of penny dreadfuls, especially in view of the fact that The New Newgate Calendar penny dreadful is not yet available in any modern edition.