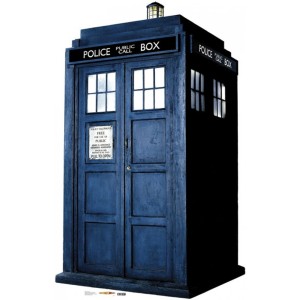 An early Christmas present I received was the Doctor Who Series 8 box set. This gave me the chance to sit down and properly review the episode ‘Robot of Sherwood’ which transports the Doctor and his companion, Clara, to twelfth-century England where they meet Robin Hood and his band of merry men. I really enjoyed this episode for several reasons, and, being in the unique position of being both a life-long fan of Doctor Who  (every DVD going back to William Hartnell’s episodes), and currently doing a PhD on Robin Hood, I thought I’d give a review of this episode.

In many ways, both the Doctor and Robin Hood are similar characters. They are heroes who fight injustice in their respective times. Both are socially conservative figures, inasmuch as they do not seek to overturn society or cause a revolution, they simply intervene where they see an injustice happening then move along. This episode received mixed reviews both from Doctor Who fans and mainstream TV critics. Some praise the episode for being light-hearted family fun, whilst others have criticised it for being too tongue in cheek  (because they expect the utmost seriousness from a series which sees a flamboyantly dressed madman ride around space and time in a blue box which is bigger on the inside).

Every generation has reinvented/re-appropriated the outlaw legend, whilst retaining some elements of the original (if there ever was an “original” Robin Hood legend). Robin in this episode is still Robin of Loxley, a dispossessed Earl, he is betrothed to Maid Marian, he lives with a gang of men in the forest whose names are Little John, Will Scarlet, Friar Tuck, and Allen-a-Dale. Tom Riley nailed it as the Bold Outlaw, and provided, in my opinion, viewers with a Robin Hood who was very close in spirit to the man who appeared in 16th, 17th and 18th century ballads. He is “merry”, a jester, and a skilled archer.

The themes of the original Robin Hood ballads are present. The Doctor assumes the role of Robin Hood’s challenger, similar to the many Robin-Hood-meets-his-match ballads which were current in broadsides in centuries past. There is also an archery contest, which Robin wins by splitting the shaft of the arrow in the target (although it looks like the Doctor wins at first, it is revealed later that the Doctor cheated by using an arrowhead with a homing device, therefore the original theme of the legend is kept in tact). Allen-a-Dale, traditionally the minstrel of the merry men in the legend of Robin Hood, gives us various musical/ballad interludes, thus providing a nice bit of continuity with the enduring themes and tropes of the Robin Hood legend. The Sheriff of Nottingham is suitably camp yet menacing at different points throughout the episode, so power mad that after he has conquered Nottingham with his army of Robot knights, he will progress on to ‘Lincoln…then Derby…then THE WORLD!’

Production-wise, the episode seems to be similar in tone to the 2006 BBC Robin Hood TV series with Jonas Armstrong. However, the producers have given us a ‘typical’ Robin Hood, felt hat, a long bow, a fat Friar Tuck, and a large, stout Little John. This is the medieval world of Ivanhoe – a “merrie England” of chivalry and romance – not a gritty Game of Thrones style world, that has been recreated for viewers. And the look they went for works well. The predominant image of the medieval Robin Hood which has come down to us today is that pleasant, merry image of Victorian and Edwardian children’s books.

Neela Debnath of The Telegraph said that the episode was “an oddly pieced together episode that didn’t make much sense”. She is right,  the episode did feel a little disparate in parts. I have no problem with this however, and if Debnath has ever read the medieval ‘Gest of Robyn Hode’ (c.1470), she’ll realise that tales of Robin Hood aren’t always supposed to make linear, narrative sense.

This is one of the better Robin Hood episodes, and I’m glad that the producer Stephen Moffatt (of whom I am NOT a fan) let this one be made. It was pure, family fun, and the people who gave it bad reviews should remember that ‘it is what it is’ so to speak: a man in a blue telephone box lands in twelfth-century England and meets the most famous Englishman from history.

…of course, as a life long Doctor Who fan and a Robin Hood scholar, I may not be the most unbiased critic. But I will say one criticism: as a Yorkshireman, and someone who has spent a lot of time researching the original ballads, they could have set the episode in Barnsdale (South Yorkshire)…it is, after all, where the “real” Robin Hood of the medieval ballads hailed from!